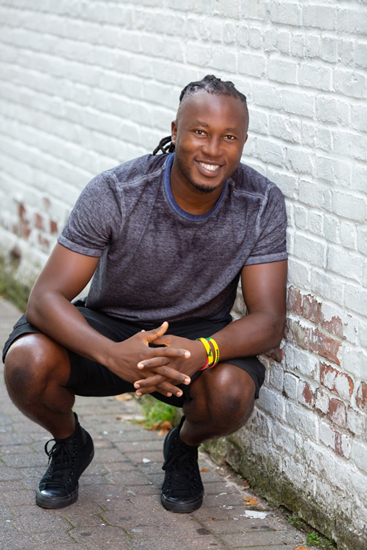 Mr. Tsasse is a native of Cameroon. He is an ex-professional soccer player who is now using his expertise to coach kids from all over the world. Julio started his first steps as a soccer player while growing up in Cameroon.

Julio was six years old when he started playing soccer in his home village of Mbouda, Cameroon. Children in Cameroon learn at a very young age that “soccer is not just a sport, but a religion.”

Although life was, and continues to be, very difficult in the village, the children do not really understand how difficult their lives are compared to other children around the world. As children do, Julio and his friends found endless ways to enjoy their free time when they were not performing hard labor on the farm or attending school.  From playing games with whatever they found lying around, to playing pick-up street soccer games in the mud (as there were no proper fields in his village), Julio remembers struggling but “not too much.”

At the age of nine, Julio started to shine and was known as a very gifted player around the community. He was asked to play with the older boys in his village and other villages as well. He and many others learned quickly that Julio had a real ability to play as the goalkeeper. Luckily for him, he was quite creative and crafty. Because there was no money to play with actual goalkeeper gloves and he was starting to play with much older boys, Julio learned to play with flip flops on his hands as a way to keep his hands safe from injury and pain. He even remembers being extremely excited when his mother returned from the market with a pair of winter gloves that he was able to use as goalkeeper gloves. He “was the coolest” — or at least he felt like it — when he stepped on the field with his “almost proper keeper equipment.” Although not an easy life, this part of his time in Cameroon is looked at with much love, happiness and the ability to be carefree.

Unfortunately, at the age of 10, Julio’s father died in a car accident and left his mother to raise 5 young children under the age of 12 on her own. This meant that although things were not easy to begin with, life was about to get even more difficult. With extreme poverty came difficulty with eating properly, ability to pay for school, and it was certainly much harder to pay for school uniforms, as his family was only able to afford one per child when Julio’s father was alive. It was during this time that Julio’s drive and motivation for soccer continued to grow. At age 10, he would walk close to 5 miles to the nearest soccer fields to play and train with local teams. His uncle and his father’s friends noticed his potential and did everything they could to help him pursue his passion for soccer. They would take him to play soccer in games where he would be seen by other clubs and scouts throughout Cameroon and even bought him his first pair of actual cleats and goalie gloves.

It was at one of the youth tournaments in Cameroon that led Julio to the next stage of his life. At 11 years old, Julio was noticed by a scout who would pay for him to go and play in an international tournament in France. While playing in the tournament, Julio was selected by SC Monaco to be trained, schooled and housed at their facility.  Even at such a young age, Julio had dreamt of such an opportunity knowing that it would be his only way out of Cameroon and would hopefully give him the ability to actually help himself and his family live a better life.  In Cameroon, even those with PhDs find themselves living in abject poverty, and each child knows that their best chance to rise out of their situation is through sport. With much fear and sadness, Julio left his family and would spend the next 6 years abroad. During this time, Julio would send the money the club gave each player back to his mother so that his siblings could continue to attend school and survive. Although lonely and young, Julio was clear that this was his role in his family, and his focus to “become someone” was sharpened.

Once Julio aged out of the academy at 16, he would return to Cameroon and play as the youngest player of a second division team. By 18, he was playing for a Division 1 team in Mali, Africa. It was from Mali that Julio was recruited to the North Carolina USL professional team, the Wilmington Hammerheads. Once his time ended in North Carolina, Julio played on former Manchester United player Kevin Grogan’s semi-pro team in New York. Not only did Grogan scout Julio as a player, but he was so confident in his abilities that he pushed Julio to become a coach at the same club where he was the Director of Coaching: The Clarkstown Soccer Club in New York. Grogan might not have known it at the time, but he was about to shape the second half of Julio’s career, as a fantastic coach known across the tri-state area.

His mission to not only help his family but also his community back home in Cameroon continues, and it is through soccer and the relationships built through soccer, that his dreams were able to become a reality. Julio is now looking to help as many young children from Cameroon follow in his footsteps on the soccer path and watch as they too are able to one day go back and elevate the lives of those they love and many others throughout their country.

It has always been a dream to give back to the children of the community that helped him succeed throughout his life. The timing seemed perfect to team up with Erica Gerstman and start to make the dream a reality.

Click to learn more about Erica Gerstman our co-founder.